Home » United States: what should we learn from the quarterly results of major companies?
Crypto News 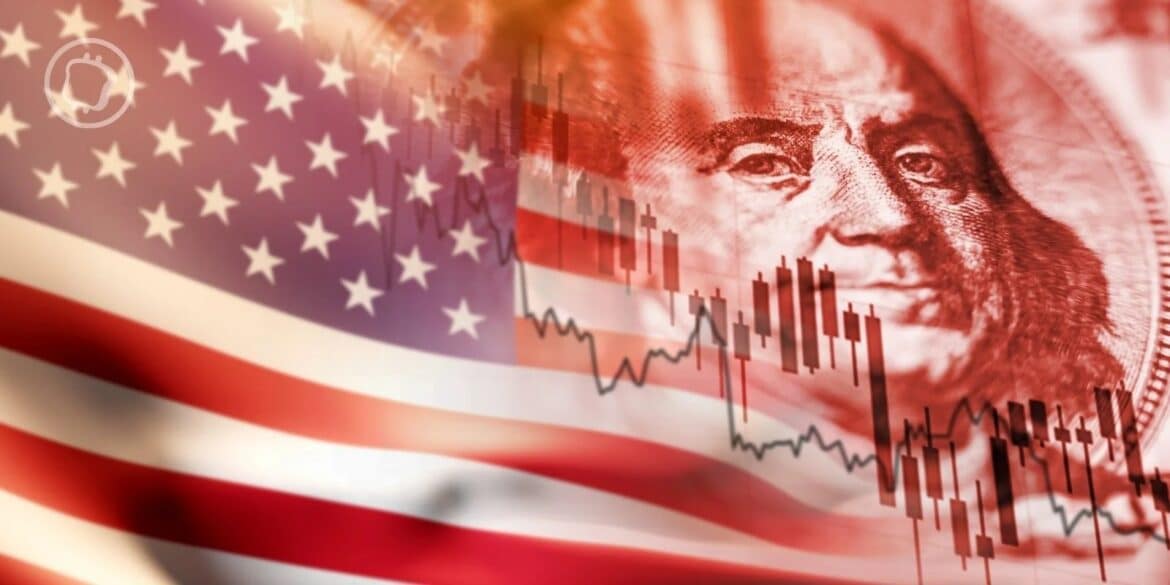 Apple, Amazon, Meta, Google, Netflix or Coca-Cola published their Q3 2022 operating results last week. In a geopolitical context under tension, large companies are suffering from a difficult economic environment (inflation, energy crisis and risks of recession). What are the trends for retail investors? We take stock in this article.

For this article, we compared 6 large-cap US companies. You can find details of their performance on the Investissons.fr website 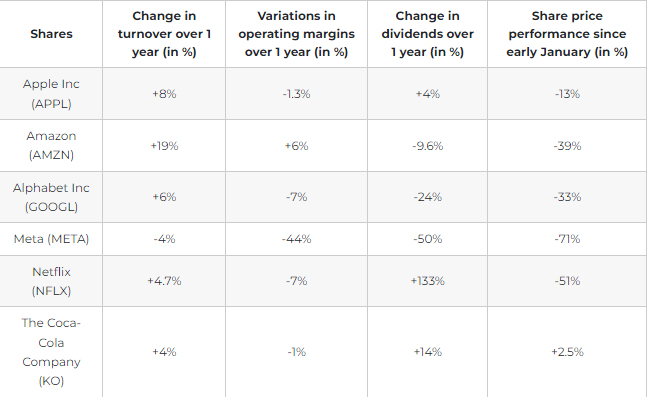 While some companies such as Coca-Cola and Apple are outperforming, the prices of large US companies are generally following the general trend of the stock market.

This is due to several notable facts.

Firstly, the operating costs of large caps are rising. With the rising cost of essential raw materials (for the production or transportation of goods), this reduces operating margins and therefore the potential profit of these companies.

In addition, the rise in the dollar is penalising operating results outside the US. Indeed, with the dollar index (DXI) rising by almost 20% since January 2022, large companies are seeing their international revenues decline.

Apple and Amazon have announced that they have lost nearly 6 and 4.6% of their revenues respectively with the rise of the dollar against other national currencies.

In addition, large companies are opting for a spending review (recruitment, focus on key departments) to get through the winter.

In an unpredictable economic context, American Tech giants such as Apple, Amazon, Google or Meta have jointly stated that the number of recruitments has been revised downwards.

They also announced that a strategic liquidity reshuffle would be implemented as early as Q4 2022 to protect against a possible future recession.

Specifically, a cost-cutting and revenue-raising approach is being applied by these companies to protect their businesses in the long term.

Finally, the last quarter of 2022 is a key period for companies. As Jeff Bezos, CEO of Amazon and Tim Cook, CEO of Apple, reminded us, the holiday season represents a significant part of their annual revenues.

Indeed, between 1 November and 24 December, households tend to over-consume in preparation for the festivities.

Despite an inflation rate of 10.7% in Europe and almost 8% in the US, the operating results of the last quarter of 2022 will allow a more accurate forecast of the trend in the US markets for the following year.

Ultimately, there is a decline in the attractiveness of risky assets in favour of value companies.

The tightening of monetary policy in the US has led to a flight of capital from risky markets (-51% and -71% for META and NFLX) to more economically resilient assets.

As shown in the table above, Coca-Cola is up 2.5% year-to-date. While the century-old company has adapted its operational strategy by raising prices to combat inflation, it has also taken advantage of its status as a value company to attract capital.

From a macro perspective, financial markets are responding to a geopolitical and economic crisis. Key factors to consider include

The increase in key interest rates by the FED and the ECB. After having supported the economy to face the health crisis, the central banks, guarantor of economic stability, are facing a generalized rise in prices, more commonly called inflation.

In order to avoid a too important devaluation of their currency, they increase their key interest rates.

In theory, as long as annual inflation growth is not contained between 1.5 and 2%, the FED and the ECB will have to keep raising rates.

This will have the effect of reducing the borrowing capacity of companies necessary for the development of their activities and consequently reduce their attractiveness to investors.

The disruption of the supply chain, the decline in the country’s exports and the tensions around its real estate sector are weighing on the Chinese executive.

At the 20th Congress of the Chinese Communist Party in October, leader and president Xi Jinping dismissed two members of the leadership council to assert his grip on the party’s political leadership.

The move caused the Hong Kong stock market to plummet by more than 6%, a flight of $2.5 billion in one day.

The liberal enclave of the Middle Kingdom is suffering a loss of confidence from investors who fear a hardening of the country’s communist policy.

Finally, we can also observe an energy crisis and tensions between East and West.

Since February 2022, the war in Ukraine has had a profound impact on the economy. A series of economic and military measures have been put in place by Europe and its allies to counter the Russian invasion.

While the effect of these measures on the Russian economy is still uncertain, this event has led to a significant increase in the cost of raw materials on the financial markets.

While there are other factors to consider, several EU member states such as Germany and Italy dependent on Russian gas exports could enter recession as early as 2023.

Finally, Sino-US tensions persist around Taipei. Indeed, the Chinese technological sector depends on American know-how, particularly in the production of semiconductors, which are essential for the production of electronic products, but also for the development of its military equipment.

Our view on the situation

Ultimately, in 2022, the economic and geopolitical environment is weighing on the financial markets. If the price of technology stocks remains negative since the beginning of the year, this retracement can represent an interesting investment opportunity for long-term investors.

For example, after declines of -56% and -57% respectively, the fundamentals of the two largest cryptocurrency stocks, Bitcoin and Ether, remain unchanged. The risk of including these assets in your portfolio today is therefore comparatively lower than at the beginning of the year.

However, in our opinion, it is important to act cautiously and to opt for informed capital management.

As we have explained on several occasions, the application of a programmed investment strategy over several weeks is, in our opinion, the most suitable method for beginners who wish to gain exposure to traditional finance or the cryptocurrency market.

DeFi: JP Morgan has completed its first transaction on Aave