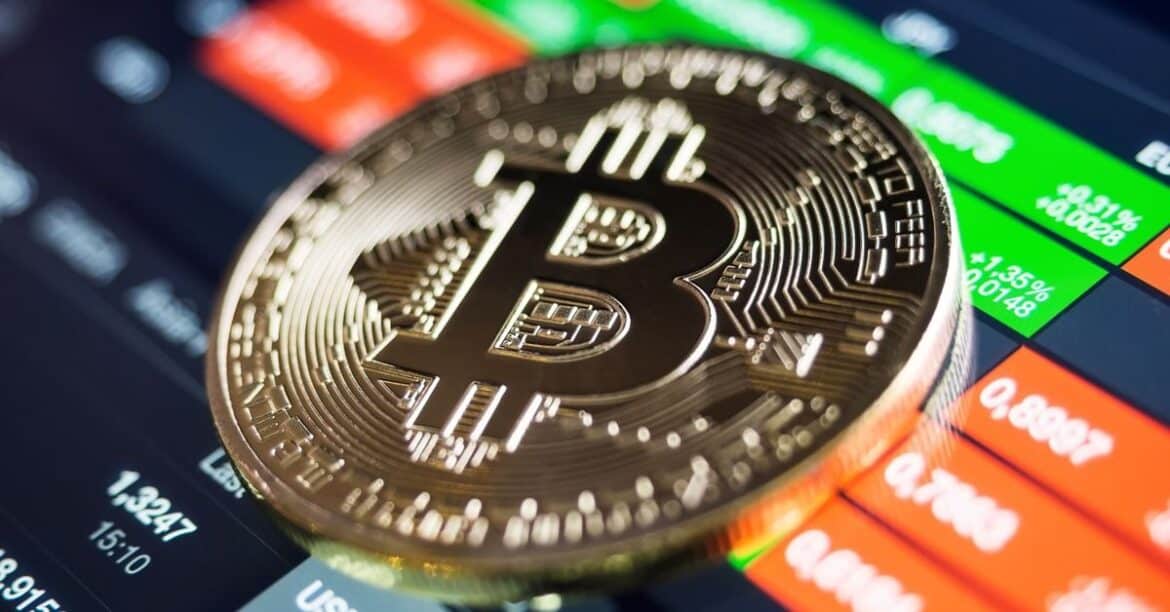 While the lower bound of the $18,000-$24,000 range has acted as a robust support to recent bearish market moves, the market is about to embark on a structural dynamic change that will take several months to unfold. Onchain analysis of the situation

Bitcoin finds its footing and rebounds to the $18,000 level

Following a test of the $18,000 level on 6 September, the market experienced a bullish impulse leading it towards $22,000, signalling a return of demand in the short term, with six consecutive green candles at the time of writing. 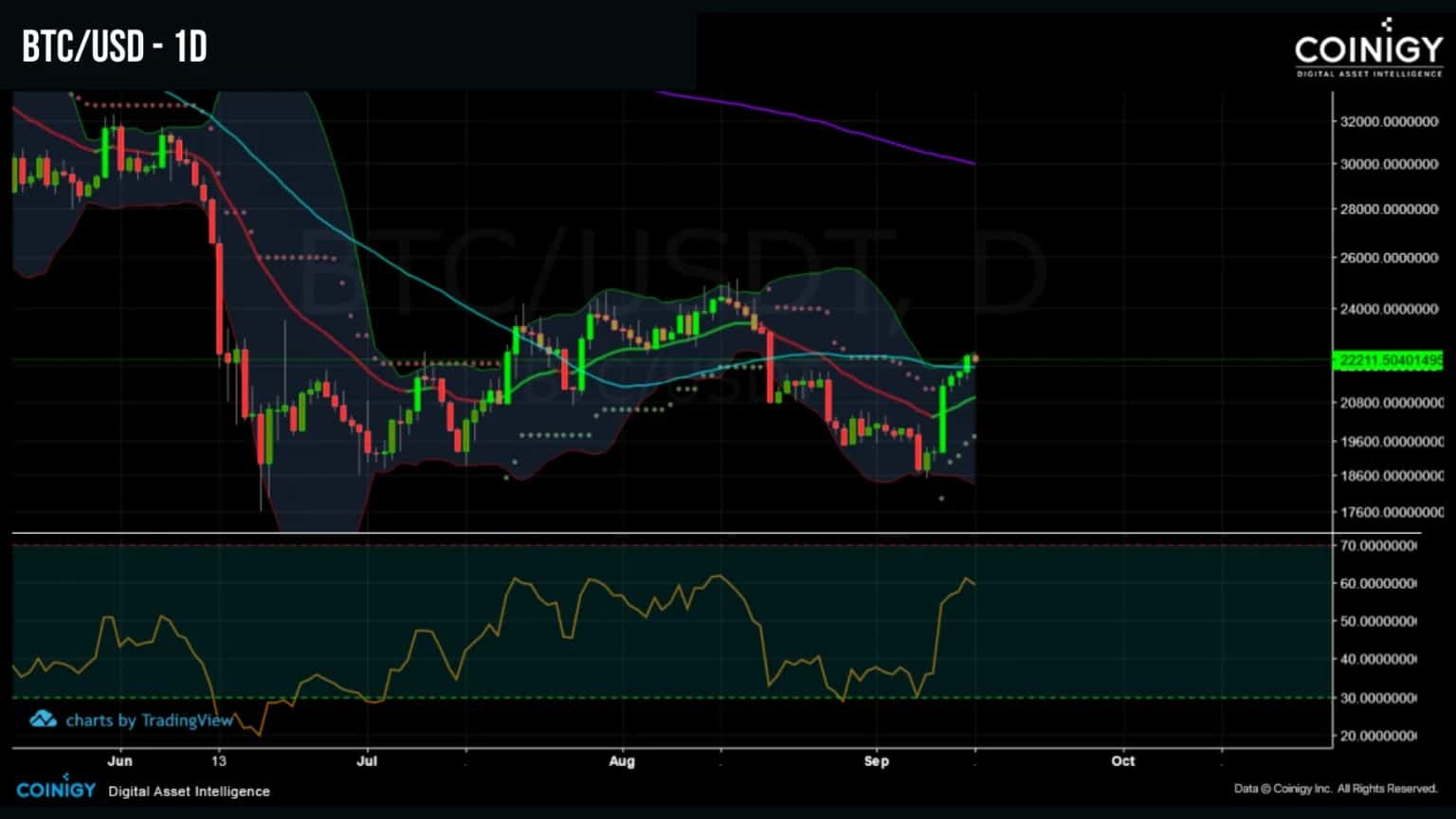 This week, in order to determine how the bear market floor is developing, we will be looking at:

Although BTC has returned to seek $18,000, participants have not shown any particular willingness to exit the market or take losses over the past week (to sell).

Indeed, while bear markets are characterised by strong loss selling behaviour, only a few hundred thousand dollars in losses have been recorded daily since the end of August, a minimal loss taking given the low price levels and broad capitulations of May and June. 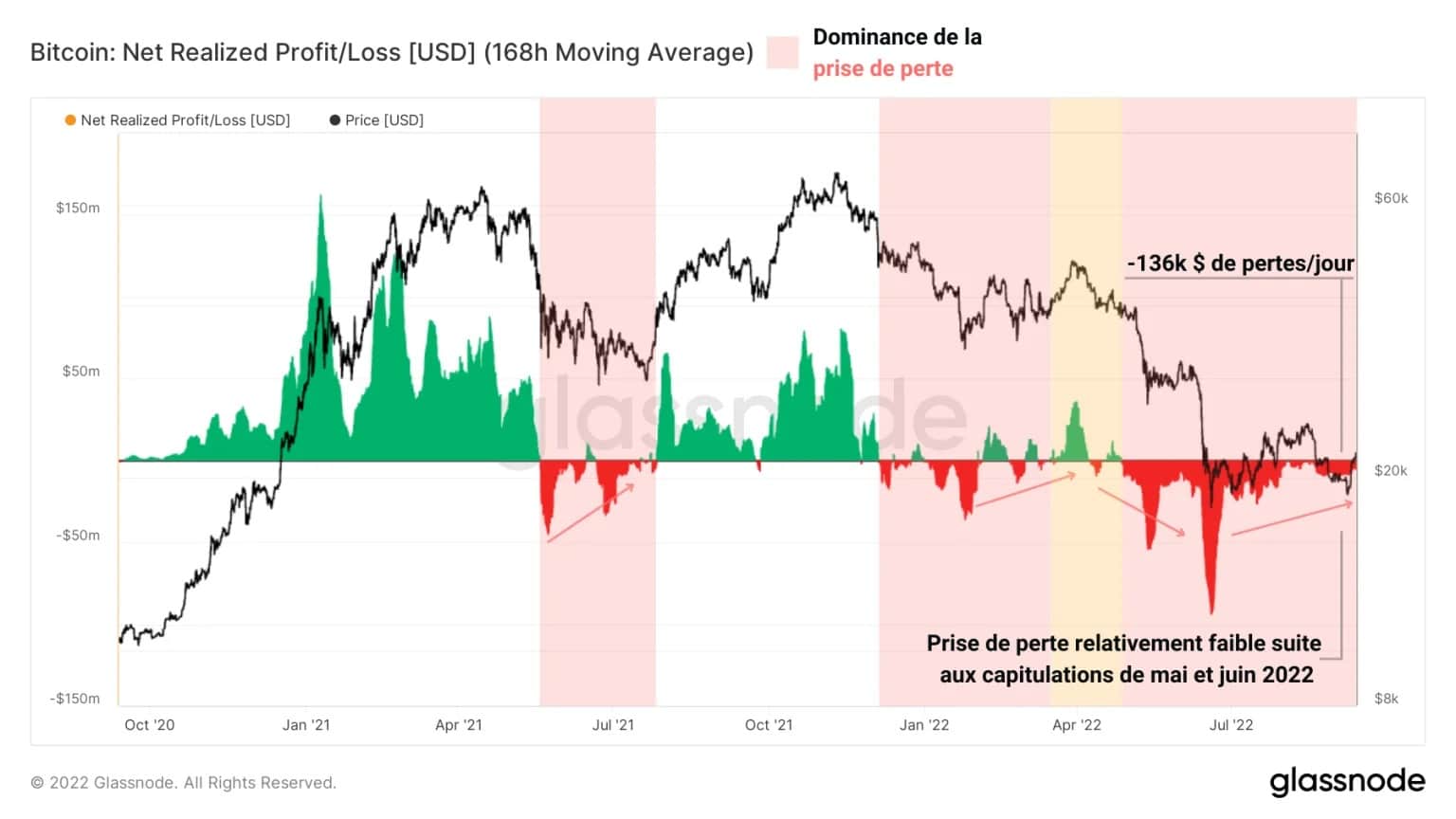 This decrease in loss realization is one of the dynamics that could allow for a return to profit selling should the BTC price break the $24,000 level in the near future.

However, we should not sell the bear before we have killed it, as we are not out of the woods yet.

Indeed, as long as the profitability of expenses ratio (SOPR) does not return to positive values (SOPR ☻ 1), a constructive long-term uptrend is not to be expected.

As we have highlighted since the beginning of August, the test of this crucial pivot point has led to a failure of the bullish recovery as participants have preferred to exit the market by selling close to their cost base rather than take the risk of a return to current price levels. 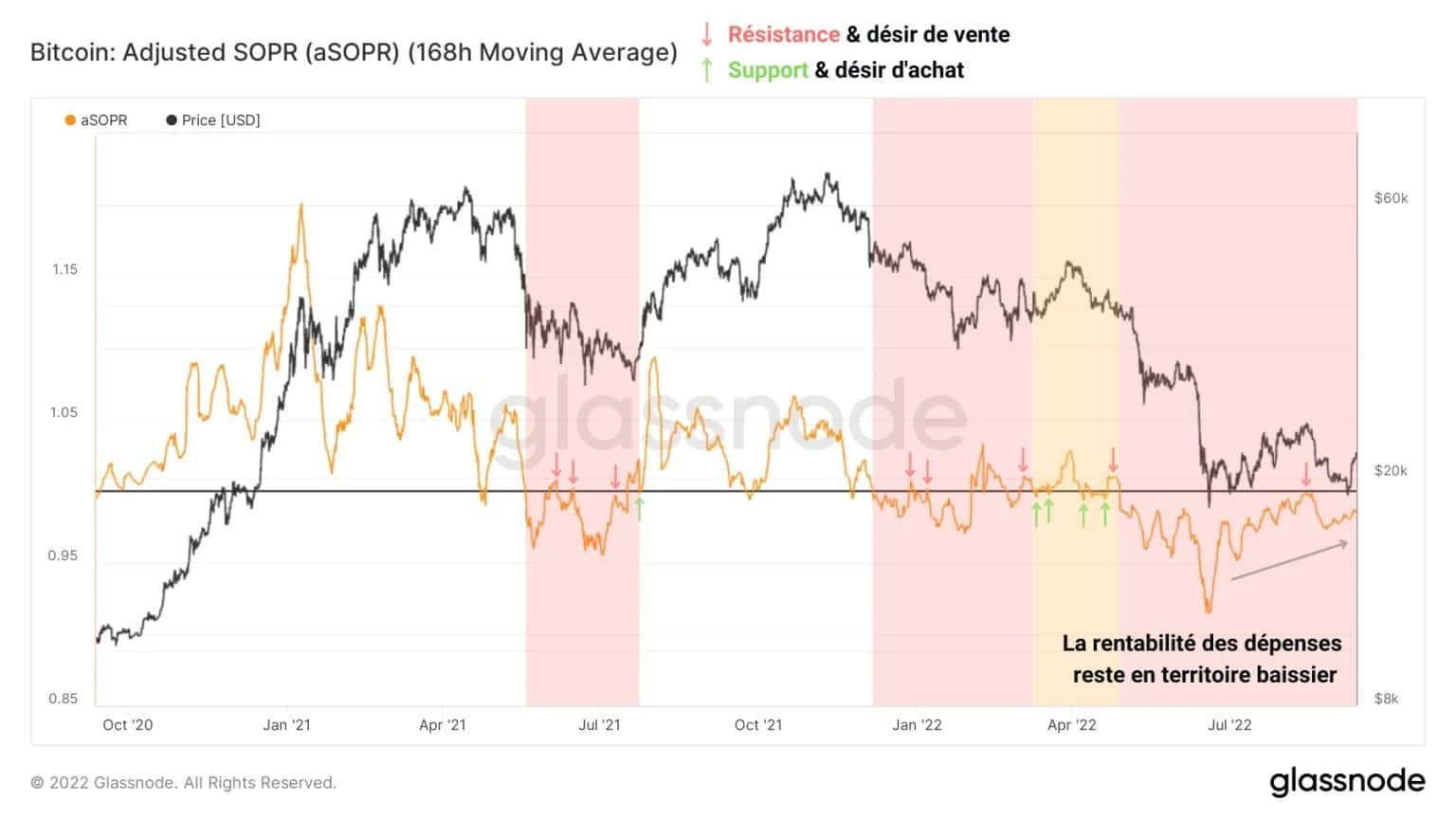 That said, despite this rejection of the neutral zone (SOPR = 1), this metric shows an encouraging uptrend, while remaining firmly in bearish territory for now.

As a result, the selling pressure on the BTC price is diminishing as participants are making fewer losses, making it less likely that the $18,000 level will be breached from below.

If you want to get into the market and buy bitcoin this could be an interesting entry point.

In addition, several models based on on-chain indicators seem to signal that a bottom is forming.

By selecting periods when more than 98% of the volume of BTC held by STHs is in a loss-making state, we can isolate local lows (in green) particularly effectively in order to highlight potential entry points during high bearish volatility events.

For example, last week this indicator signalled a new local low, when the BTC price returned to test the current bear market floor at the $18,000 level. 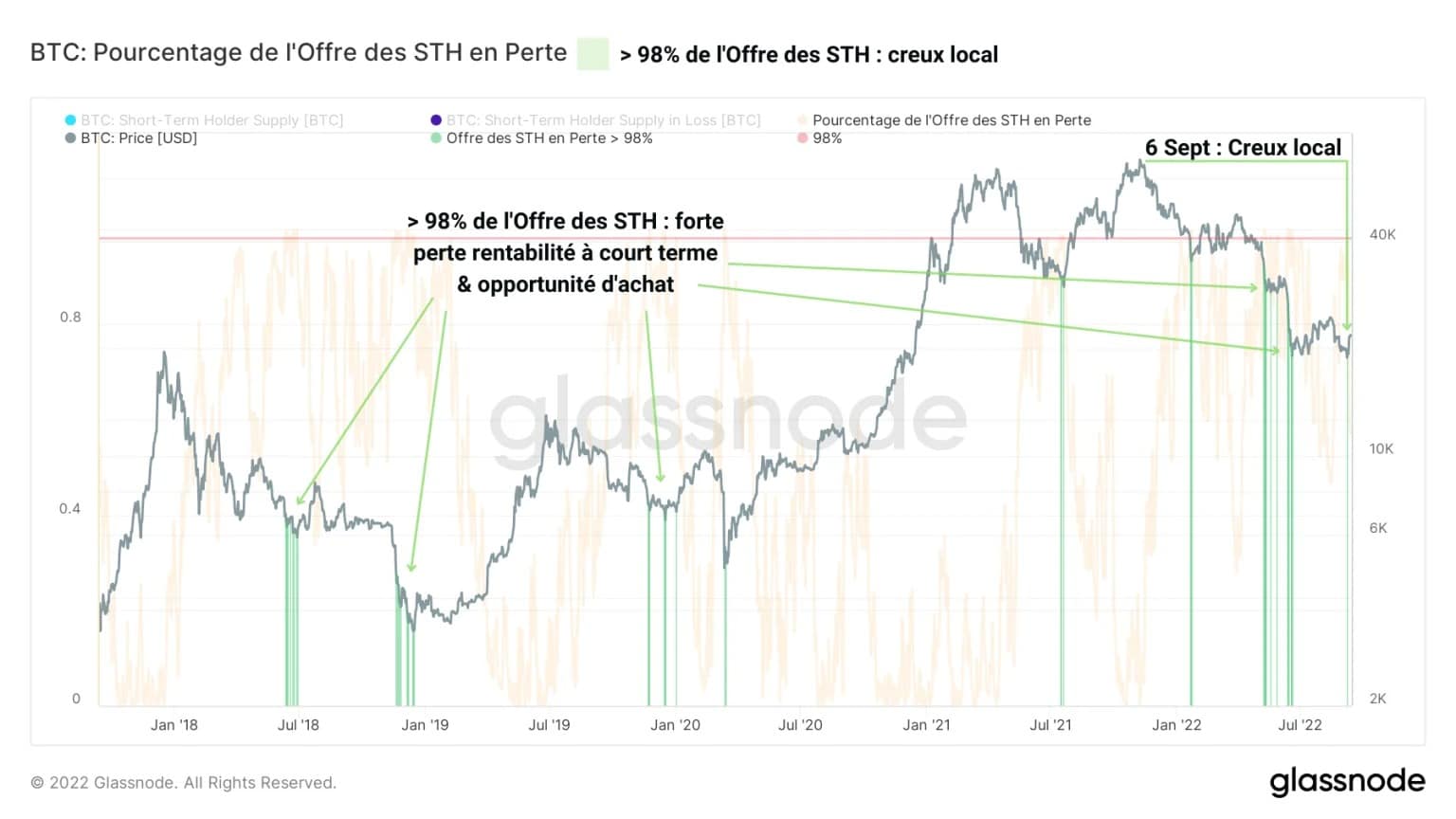 Figure 4: Supply of short term holders in a loss-making state

This does not necessarily mean that the bear market is over, it was a relatively good entry point to open a long (bullish) position in the short term.
Even more, using a model based on the interaction of the realised prices of the STH ( 155 days), we can identify transitions between the final phases of bearish cycles and the early phases of bullish cycles.

As realised prices represent the average purchase price of BTC acquired by a certain cohort of participants, they represent their cost base and are a way to study their buying/selling behaviour and profitability. 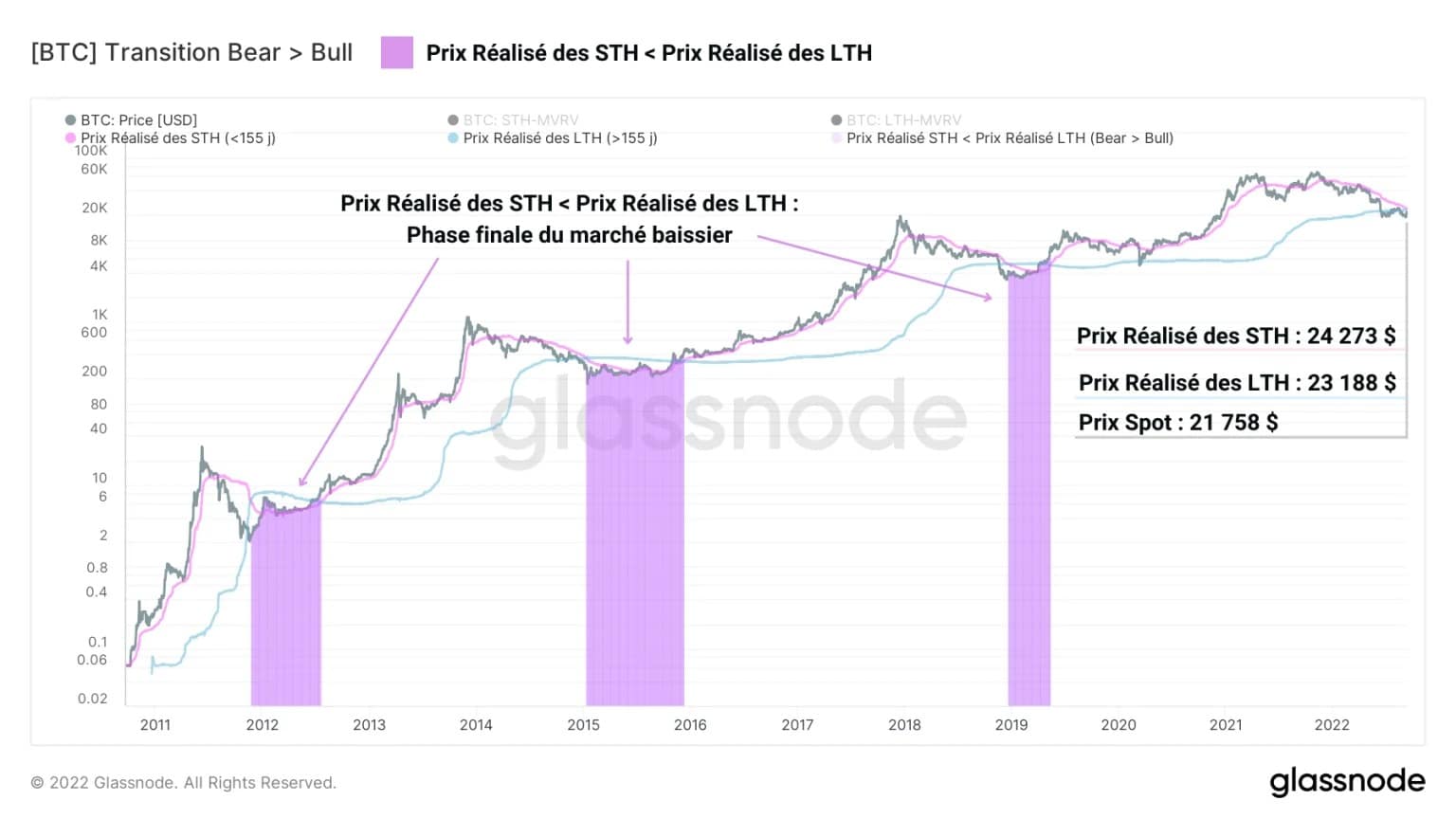 It should be noted, however, that this transition takes several months to settle in. During this time, HODLing’s behaviour (no selling) and the conviction of buyers are being tested.

Finally, the relationship between the BTC price and the strength of the DXY dollar index allows us to establish a clear link between the two assets of the BTC/USD trading pair, which is considered to be the most observed by private and professional players.

It can be seen on the chart below that each fall in the dollar, highlighted by a bearish divergence in the RSI (green), has given rise to strong bullish movements for the Bitcoin and cryptocurrency market.

It is therefore timely to highlight the current bearish divergence in the DXY RSI, which has been in the process of forming since May. Although it has not yet resulted in a fall in the price of the USD, this dynamic should be watched closely for the next few months as it may catalyse the birth of a future bull market. 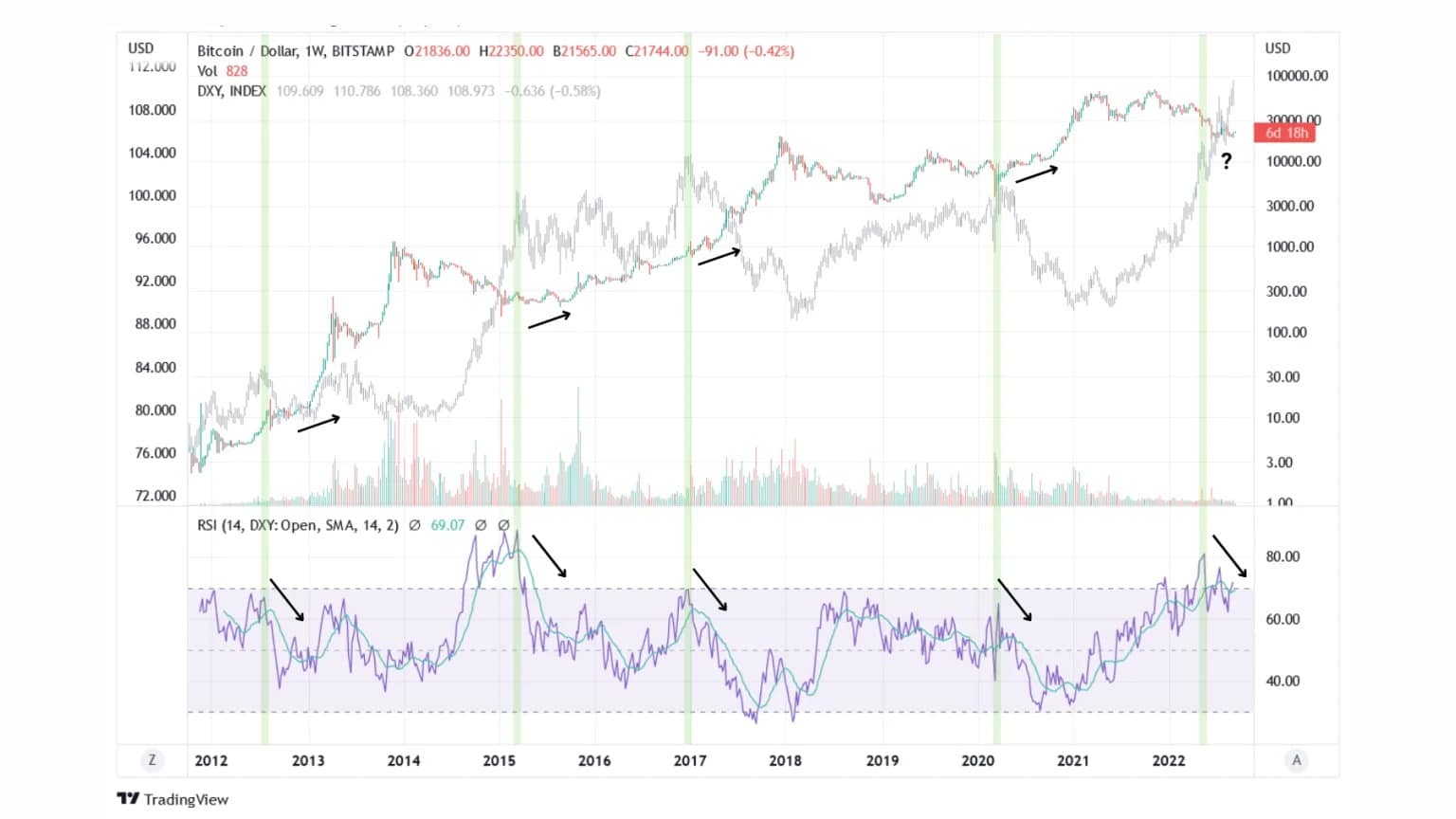 In summary, this week’s data indicates that, despite the slight loss taking and the deteriorating macroeconomic and geopolitical backdrop, the lower bound of the $18,000-$24,000 range has acted as a robust support to the market’s recent bearish moves.

In addition, the loss of profitability of BTC held in the short term and the bear ☻ bull transition pattern allow us to determine that a local low has occurred at the $18,000 level and that the market is about to begin a structural change in dynamics that will take several months to implement.

Finally, potential future weakness in the dollar, foreshadowed by a bearish divergence in the DXY’s RSI, could support the BTC/USD pair in the near future.

Get one month with 40% discount to test our service at reduced price with the code PROF when you register.

Ethereum moves to The Merge: what does this mean for the ETH price?