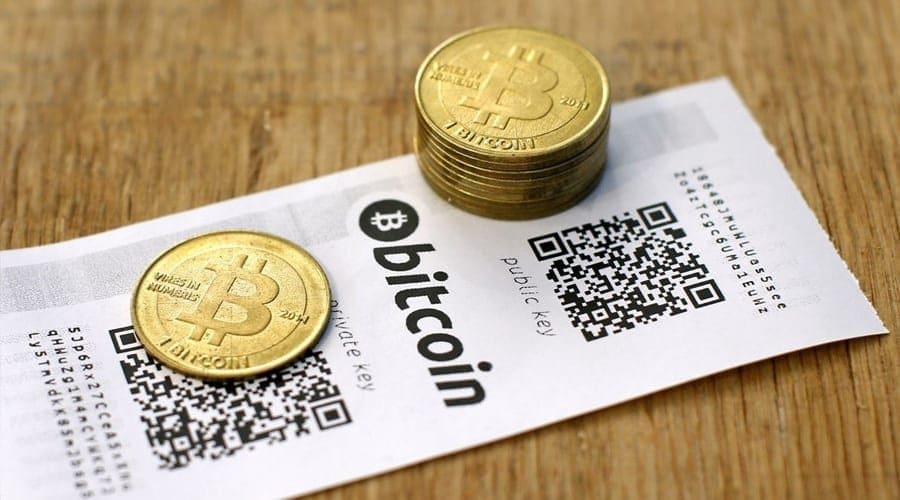 On its auction site, the Ministry of Justice of North Rhine-Westphalia auctions Bitcoin for the first time. A total of 465 coins confiscated by the police from cyber criminals are to change hands via the platform. Is this still a justice ministry – or already a Bitcoin exchange? And how does the justice system deal with regulation?

The Central and Contact Point for Cybercrime (ZAC NRW) has confiscated bitcoins “worth an eight-digit euro amount” from various investigations, explains NRW Justice Minister Peter Biesenbach in a press conference. He announced that this would probably not be the last time this would be done, which means that the website of the judiciary could also become a permanent place to buy Bitcoins.

Bitcoin is, Binsenbach advertises, the reserve currency among cryptocurrencies and as such extremely popular – albeit not only among legitimate market participants, but “unfortunately also among criminals.” The coins can be used anonymously, there is no obligation to identify oneself. This makes Bitcoins the dream of every cybercriminal.

A total of 215 copies of this pipe dream are going on sale, and another 250 will soon be “recycled”. Together, these two packages are worth about 25.5 million euros today. “The sum is fiscally significant, but it is also evidence – worrying evidence – of the sums that are now being made from all manifestations of digital crime,” comments Biesenbach.

The exploitation of the confiscated crypto assets is “legally quite complex”, explains Markus Hartmann, who heads the ZAC as senior public prosecutor. Specifically, adds his colleague Andreas Brück, the law stipulates that in the case of confiscated goods, the auction must have priority. Until now, confiscated Bitcoins have nevertheless been sold on the market because the technical possibilities of an auction were lacking.

With a specially developed procedure, this can now be done, says Hartmann. In doing so, one relies on the Ministry of Justice’s own internet presence to ensure that all “legal requirements of the Code of Criminal Procedure and the Code of Criminal Execution are fully complied with”.

Since Monday, the first 15 offers for Bitcoins have been listed on the auction site. The largest package comprises 10 coins, plus three offers for 1 coin each, six for 0.5 and five for 0.1. Some of the current offers are below the market price of around 54,000 euros per bitcoin today, for example for the ten bitcoins for which the highest bid is currently 503,520 euros. In some cases, especially for the small tranches, the bids exceed the market price considerably, such as when someone bids 6,520 euros for 0.1 bitcoin. 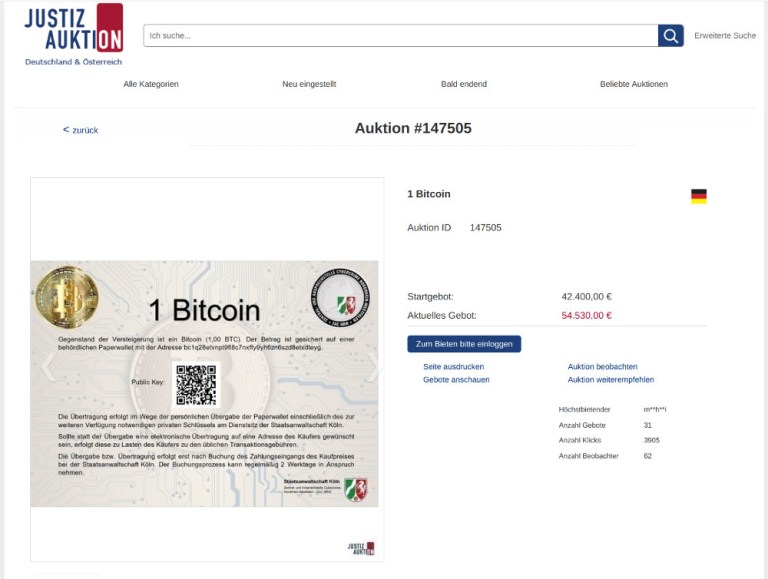 These 16.5 Bitcoins are of course only a starting signal. Almost 200 more coins will follow in the immediate future, 250 more a little later, and presumably the police of the state will also ensure a steady supply. Initially, NRW will only auction bitcoins, as they are the most frequently confiscated lead currency in cybercrime. But it also has other cryptocurrencies that will also be exploited in the future.

The auction site looks a bit like a somewhat outdated marketplace for Bitcoins. It is reminiscent of the time when Bitcoins were still vaguely sold via Ebay or rather amateurishly concocted websites. What is special about the auction site is that it allows for relatively private trading. Were it not from the judiciary itself, one would suspect an unregulated, semi-legal, somewhat suspect marketplace, based in a tax and regulatory haven.

Above all, the KYC (Know Your Customer) procedure is amazingly moderate compared to what is otherwise common in Germany. At Bitcoin.de, it was possible for a long time to trade up to certain, quite manageable annual amounts with a KYC light, where verification through an SMS and the bank account was sufficient for the time being. However, this type of KYC is no longer possible for regulatory reasons. Today, nothing works without full verification.

On the auction site of Justiz NRW, on the other hand, you can register and bid with nothing more than an e-mail address. If you are the highest bidder at the end of the auction, you have to pay the sum by bank transfer. So we would have a kind of KYC light, albeit without SMS – and with amounts of more than half a million euros. In the private sector, the supervisory authorities would hardly tolerate such lax KYC.

However, this could also be seen as a clever move by the Ministry of Justice to elegantly circumvent the “enhanced due diligence requirements for the transfer of crypto assets” that came into force at the beginning of October. Actually, exchanges and other trading platforms have to document outgoing transactions very precisely in order to comply with the FATF’s “Travel Rule”.

But the ZAC does not send bitcoins – it sells paper wallets. “The amount is secured on an official paper wallet at the ZAC NRW,” explains the auction site, which is very transparent about the address. The transfer takes place “by way of personal handover of the paper wallet, including the private key necessary for further disposal, at the office of the public prosecutor’s office in Cologne.” If desired, an electronic transfer can also take place, but only after video identification of the buyer.

This form enables the ZAC, explains Andreas Brück, to apply the same security procedures as for analogue goods – and to guarantee the storage of large assets.