Home » Illicit transactions are exploding in the DeFi sector, according to a report by Chainalysis
BlockchainCrypto News

Illicit transactions are exploding in the DeFi sector, according to a report by Chainalysis 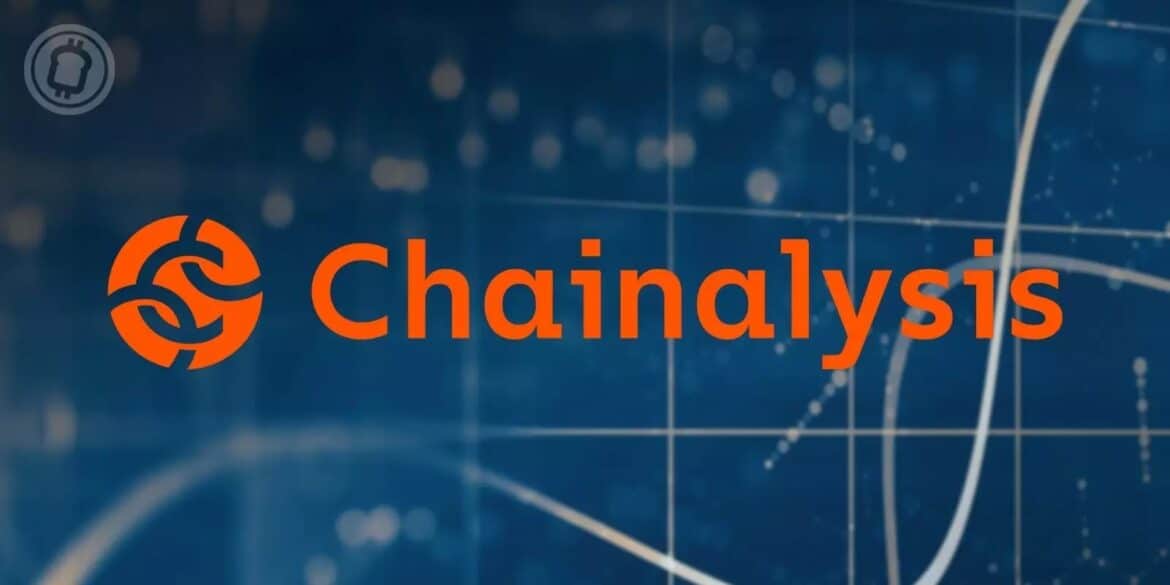 The company specialising in the analysis of blockchain transactions, Chainalysis, presents a report in which it highlights the weight of illicit activities in decentralised finance (DeFi). For 2022, they already represent 2.4 billion dollars.

Chainalysis’ investigation into the arrival of illicit funds in DeFi

In a report unveiled on Thursday, Chainalysis publishes the state of illicit activity in cryptocurrencies, focusing on their weight in decentralised finance (DeFi): 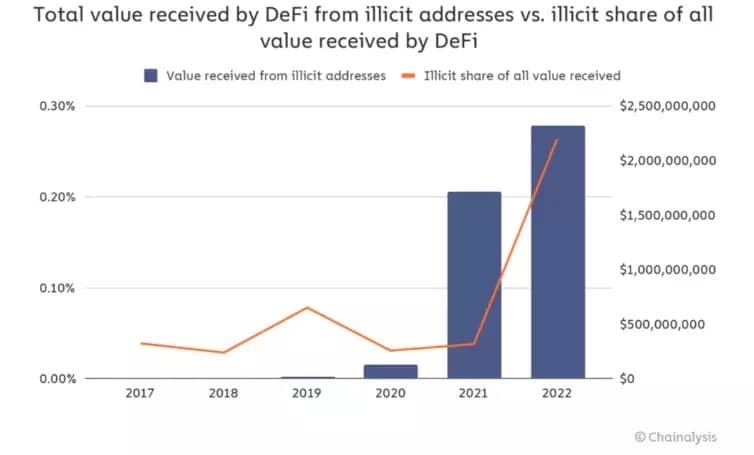 The first graph above highlights the arrival of illicit funds in the various DeFi protocols. While in the whole of 2021, these inflows of cash weighed in at just over $1.5 billion, 2022 already beats the previous year by currently clocking in at around $2.4 billion.

In turn, the share of this volume in the total DeFi has also experienced a strong multiple. Whereas in 2021 this would have represented only 0.04%, we are currently at 0.21%.

But this has to be put into perspective considering that on the one hand, we will have to wait until the end of the year to really compare, and on the other hand, this represents one dollar received every 476 dollars according to current data.

Status of stolen assets in the DeFi

Chainalysis’ investigation also looks at the amount of stolen funds in the DeFi ecosystem, quarter by quarter: 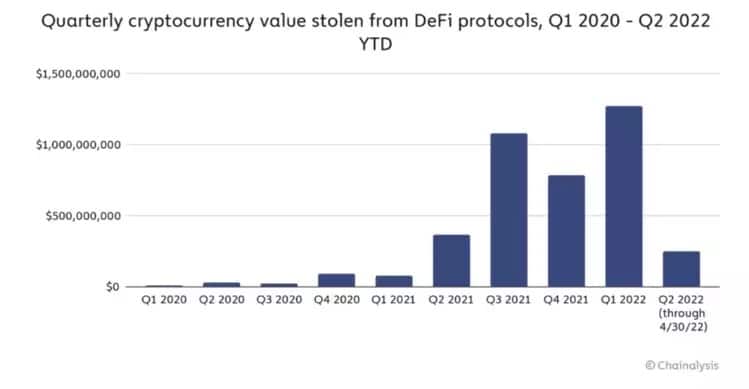 Figure 2 – Amount of stolen funds per quarter in DeFi

Zooming in on the figures presented so far, we begin to understand why 2022 seemed to start so badly. Indeed, with nearly 1.3 billion stolen in the first quarter of this year, one is reminded of the impressive hacks on the Ronin sidechain and the Wormhole bridge, which alone weigh in at three quarters of the total. 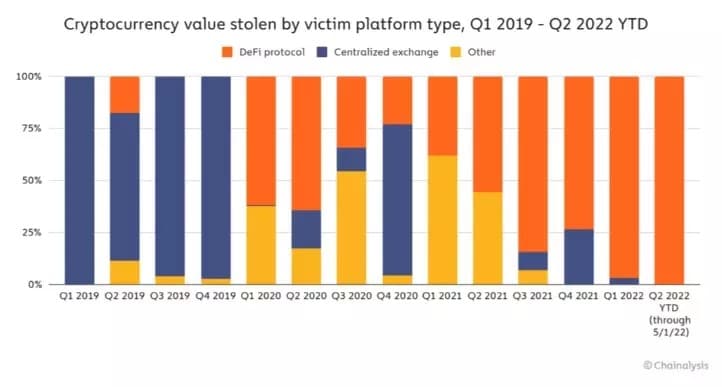 Since 2019, we can also see that, unlike the other players in the blockchain landscape, DeFi is becoming increasingly important in the targets chosen for attacks.

While at the beginning of 2019, centralised cryptocurrency exchange platforms were the only victims of hacks, the trend has completely reversed this year to the detriment of decentralised finance.

As is regularly pointed out, North Korea plays a major role in these attacks and also seems to be developing an appetite for DeFi according to Chainalysis: 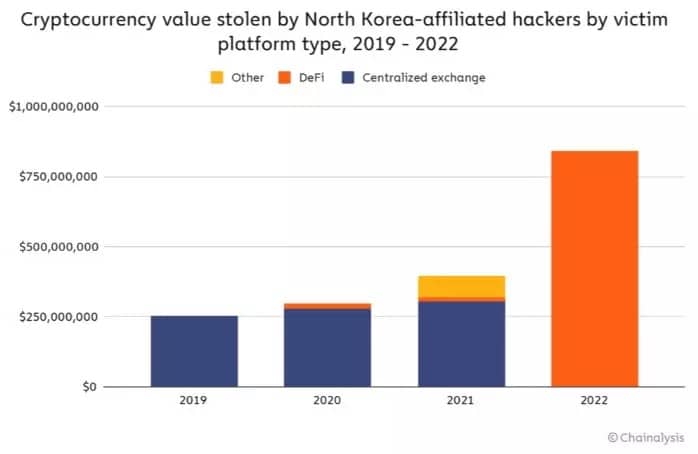 Stand up to the data

With all these billions, the numbers presented so far may seem impressive, and they are. But they should be seen in a more critical light.

Firstly, the reason DeFi has been increasingly targeted for attack since 2019 is simply because it really started to emerge in late 2019, early 2020. As the total volume locked (TVL) increased exponentially, the amounts of funds stolen mathematically followed.

Secondly, a thief of any kind tends to look for the least amount of effort for the maximum amount of results. So, as this facet of blockchain is still relatively young, security research and fixing flaws can sometimes lag behind the collective hype and speed of adoption.

Someone qualified will then see them as easy targets, easier in any case than large centralised exchange platforms, capable of injecting millions of dollars into their security budget. 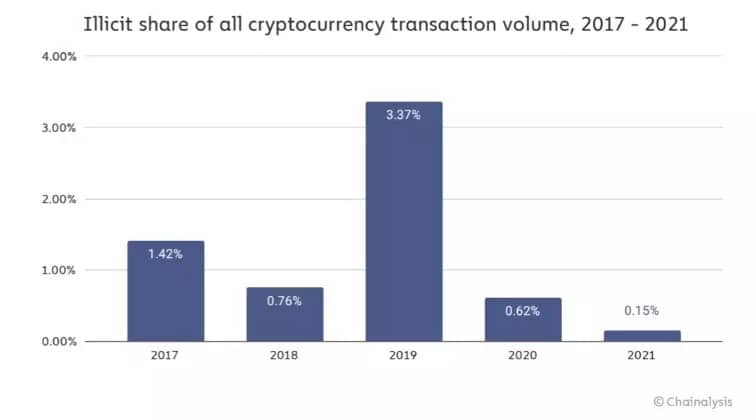 Finally, let’s not forget that despite the current downturn in prices, the overall ecosystem has been on an upward trend in recent years. This is why $1 billion in 2019 does not carry the same weight as $1 billion in 2022.

Moreover, as can be seen in Figure 4, the total volume of illicit transactions is trending downwards. The statistical aberration in 2019 is largely due to the PlusToken case.

As is often the case, it is easy to make statistics mean whatever you want, so it is important to keep a critical eye on them and to try to understand what they imply.