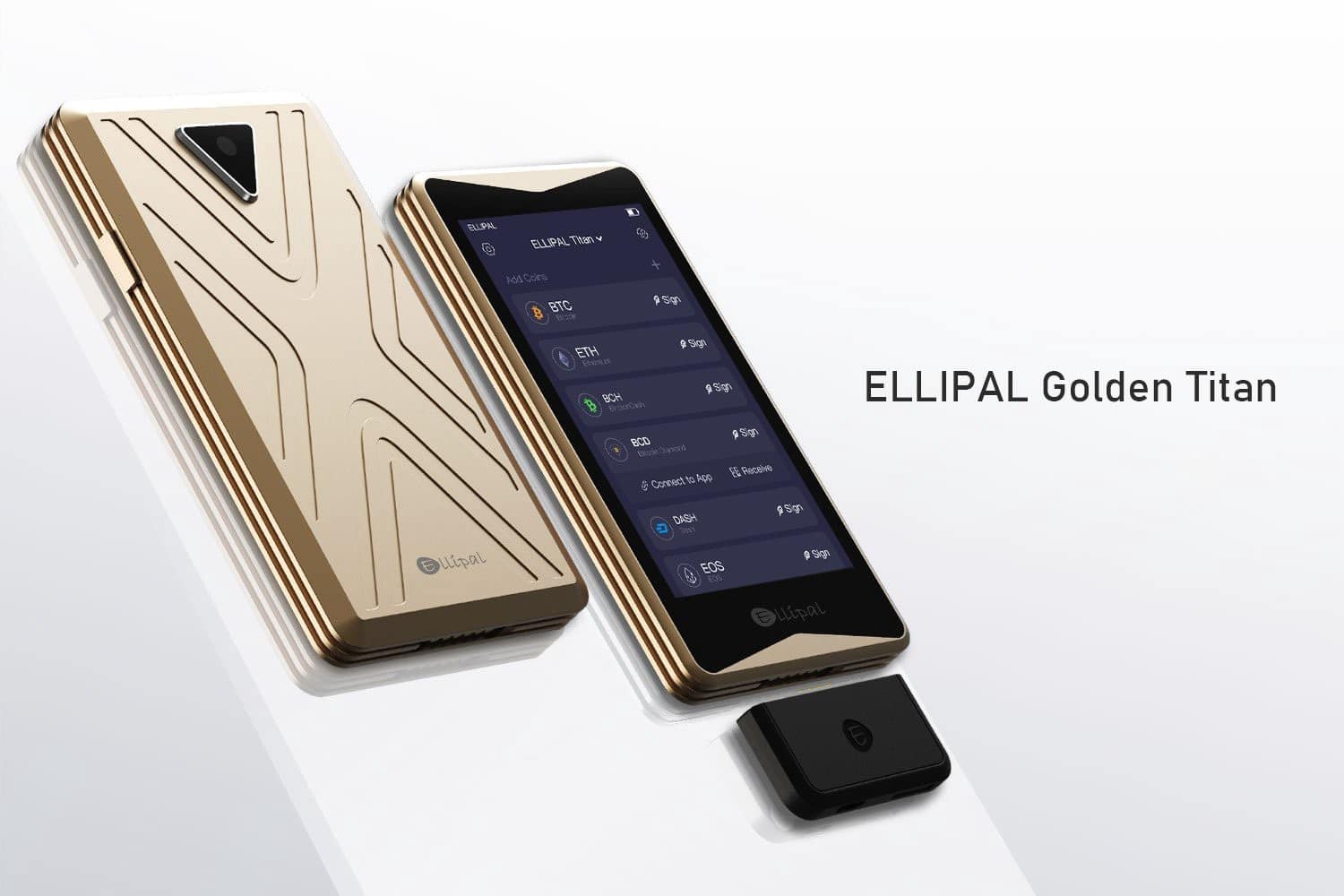 The Ellipal hardware wallet is the only “cold” hardware wallet. It builds an almost perfect bridge between uncompromising security and user-friendliness – and also scores points with many innovative functions.

Security-focused Bitcoiners now have the choice between a considerable number of hardware wallets. Today, we introduce you to one of them: Ellipal Titan.

Ellipal stands out from the other wallets with one special feature: it is a “cold” hardware wallet. This means that it has no contact with the internet, which is generally considered the safest way to store coins. Where there is no internet connection, there are no hackers.

Other hardware wallets, such as those from Ledger or Trezor, are connected to a PC, laptop or smartphone. The sensitive operation of a transaction – signing with the private key – takes place in a secure environment. But there is a contact to one’s own system and thus to the internet, which means that attacks by hackers cannot be completely ruled out, for example if there is a fault in the software or hardware. It is also possible that the manufacturers of the wallet somehow extract the private keys.

These risks are not necessarily huge. But they are there as long as a hardware wallet has contact with the internet, and they can be reduced but never completely eliminated. Only a cold wallet can do that, as known from paper wallets or from isolated computers.

Ellipal has now managed to produce a cold hardware wallet. This not only eliminates the residual risks associated with other hardware wallets, but also significantly simplifies cold signing for the user. To sum up, the Ellipal wallet bridges the gap between uncompromising security and user-friendliness in a way that is hard to beat.

Unboxing and the first wallet

For testing, Ellipal sent me two products: The cold hardware wallet and a metallic slider for the seed. The hardware wallet is reminiscent of a somewhat dated smartphone in format and style. Its shell is completely metallic, it is resistant to dust and water, and if you damage the frame, the chip deletes the keys by itself, according to the manufacturer. 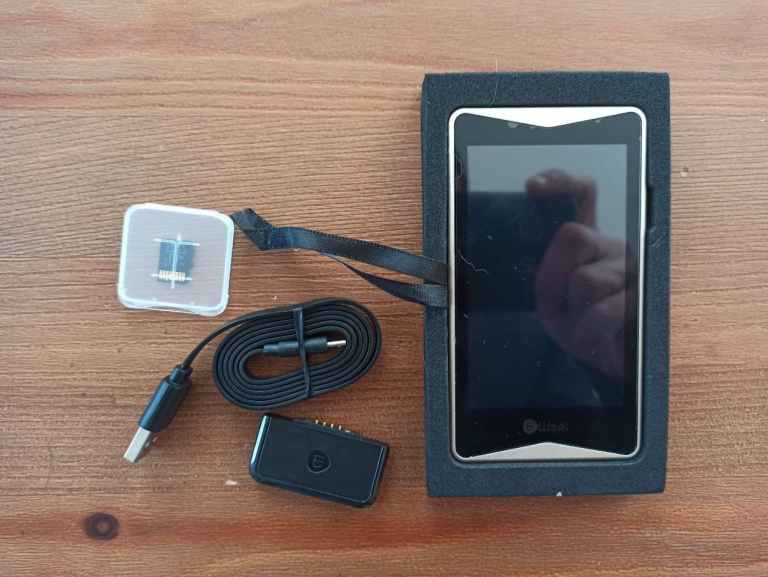 The operation is intuitive: You switch on the hardware wallet via a button in the same place where the on/off buttons of smartphones are usually found. The rest is done via the touch screen. At startup, you can generate a wallet or import it, which is possible with seeds, keystores, secret keys and private keys. With this variety of options for importing, Ellipal is way ahead of competitors such as Ledger or Trezor. 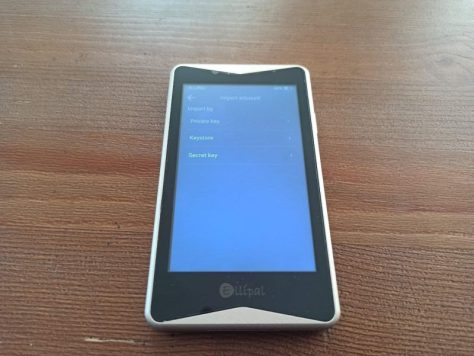 Back to setting up the wallet: first you have to choose a password, which will be used to encrypt the keys, and which you will type in every time you sign. After that, the wallet forms a seed of twelve words. This is the lowest level of security for seeds – other wallets generate seeds of 24 words – which, as far as I can see, is not a problem at the moment, but might become one in the future due to a lack of entropy. Even though this is unlikely, it would have been nice to have the option to generate longer seeds.

Those who want to remain uncompromisingly secure generate their private key with dice, and then play it into the cold wallet. 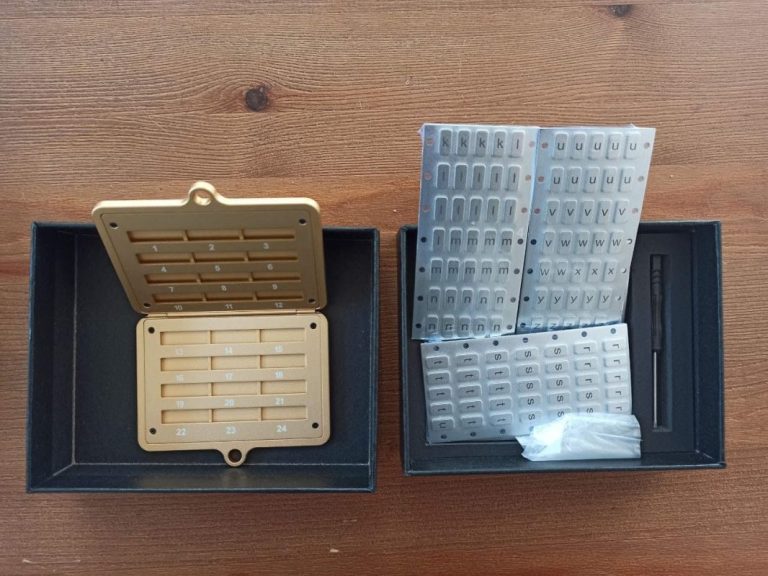 I have continued with the 12-word seed. In itself, I should probably now put it in the metal slider. To do that I would have to unscrew the slider, break out letters from metal plates, put them in rails and screw them together. That was too much effort for a test. If you like this kind of tinkering, you will enjoy it, and there is no doubt that a metal slider will be much more resistant to fire, water and so on than paper. It would be too annoying if the house burned down and you lost the cold wallets on which you had the coins you needed so much to rebuild the house. With the metal slider, the seed at least has a chance of surviving. 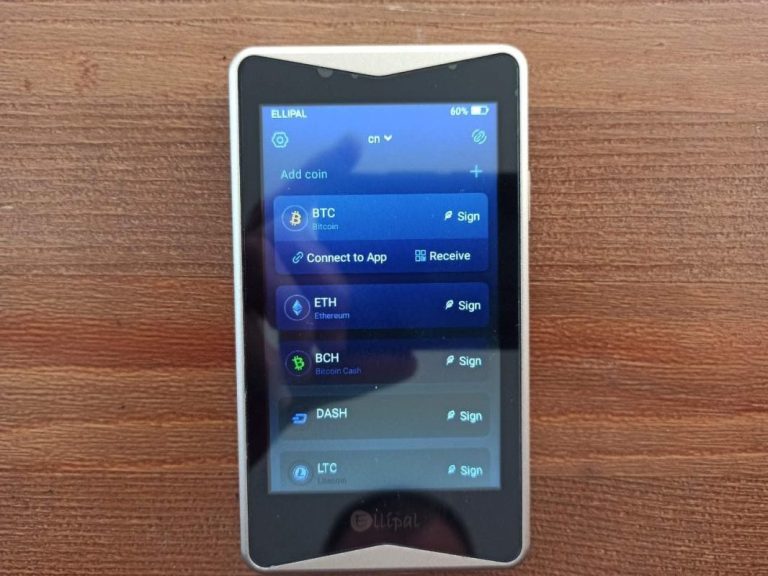 Ellipal supports numerous cryptocurrencies. Among them the usual ones – Bitcoin,  Ethereum, Bitcoin Cash, Dash, Litecoin, Ripple, Stellar, Dogecoin, Binance Coin, Polkadot, Cardano – as well as some obsolete ones like Groestlecoin, unnecessary forks like Bitcoin Gold or Bitcoin Diamond, as well as unknowns to me like Firo, SmartCash and Electra. And of course tokens on Ethereum and other blockchains.

The QR code as the only connection

As I said, the hardware wallet is “cold”. It has no connection to the internet. It can form a seed, derive private keys for all sorts of coins from the seed, and then derive addresses from those. But it cannot contact a blockchain or an explorer. Therefore, it does not know if there is any credit on the addresses.

To work with the hardware wallet, you need a software wallet. As far as I can see, this is only available for smartphones with Android and iOS. You can synchronise this app with the wallet on the hardware wallet in order to import the addresses. All you have to do is tap on “connect wallet” and scan a QR code. The app only learns the addresses, but not the private keys. But that is enough to check the balance, to receive payments via QR code or address and to create transactions.

There is only one thing the app cannot do: sign the transaction. And that’s where the magic of Ellipal comes in. The app and hardware wallet communicate exclusively through QR codes.

The app forms the still unsigned transaction and turns it into a QR code. The hardware wallet scans it, signs it and outputs it as a QR code. You scan it again with your smartphone – and you have a complete transaction that you can send. 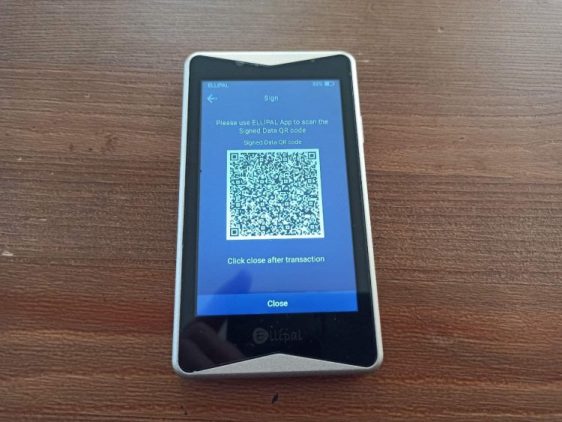 I find the process quite ingenious. The Ellipal hardware wallet is a very practical alternative to make it easier to use wallets that you store as a written down seed, without sacrificing more than a minimum of security.

More than just a wallet

Ellipal wants to be more than just a cold hardware wallet, though. Rather, the smartphone app is intended to become a kind of financial hub. In the wallet app, you can also buy or exchange coins. You can even stake some, such as ADA, ATOM, TEZOS, DOT and KSM – while the coins are resting on the cold wallet. Staking couldn’t be easier or safer.

In addition, the app links to so-called DAPPS – decentralised applications, either on Ethereum or on the Binance Smart Chain. For example, you can swap at Uniswap or PancakeSwap, lend at Compound and Aave, buy NFTs at OpenSea or Rarible and so on. Even second-layer Dapps like Loopring are supported. So you can use DAPPS without having to get your coins out of cold storage. As usual, the app communicates with the wallet via QR codes. This all works smoothly and is quite useful.

Not yet mature in some places

On the whole, I like the Ellipal wallet very much. Especially the successful combination of a cold hardware wallet with a good usable app. While other hardware wallets introduce risks that are difficult for the user to keep track of, Ellipal creates transparent security that is easy to check.

The magnetic “security adapter” is also a good idea in itself to prevent attacks via the USB connection. The hardware wallet can be loaded via this adapter and updates can be applied with a mini-SD card. But at this point I encountered a problem: The wallet did not load and the connection felt quite “floppy”. After asking Ellipal and seeing video evidence that the wallet was indeed not charging, they sent me a replacement extremely quickly. It then also worked.

In general, the wallet gives the impression that the material has been saved in one place or another. The case is sturdy, the glass is of high quality, yes. But why is the charging cable so short? Why does the battery run out so quickly, even though the Wallet basically has very little to work with? And why does it take so long to start the wallet – could it be that the chip in the hardware is not the best? However, signing is pretty quick.

The wallet app is not perfect at every point either. It does its job and integrates wonderful ideas conceptually. However, I don’t find the design particularly appealing – most other wallets look better. Above all, however, it is annoying that the wallet is slow in one of its core functions: receiving transactions. For example, at least with Dash and Bitcoin Cash (BCH), it did not recognise unconfirmed transactions. With Dash and Bitcoin Cash, it even took some time after the first transaction for the wallet to recognise the transaction.

All these annoying details could be interpreted like this: Ellipal has a great idea, a product that works conceptually and the ambition to make the Wallet the Swiss Army Knife for crypto. In doing so, they have also presented a high-quality product – but it could be made even more perfect in the details.

Nevertheless, for me Ellipal is the first hardware wallet that actually excites me. If you order a wallet, you can use my affiliate link. Then I get a small commission.