Home » Is FTX doing everything it can to stop its FTT token from falling?
Crypto News

Is FTX doing everything it can to stop its FTT token from falling? 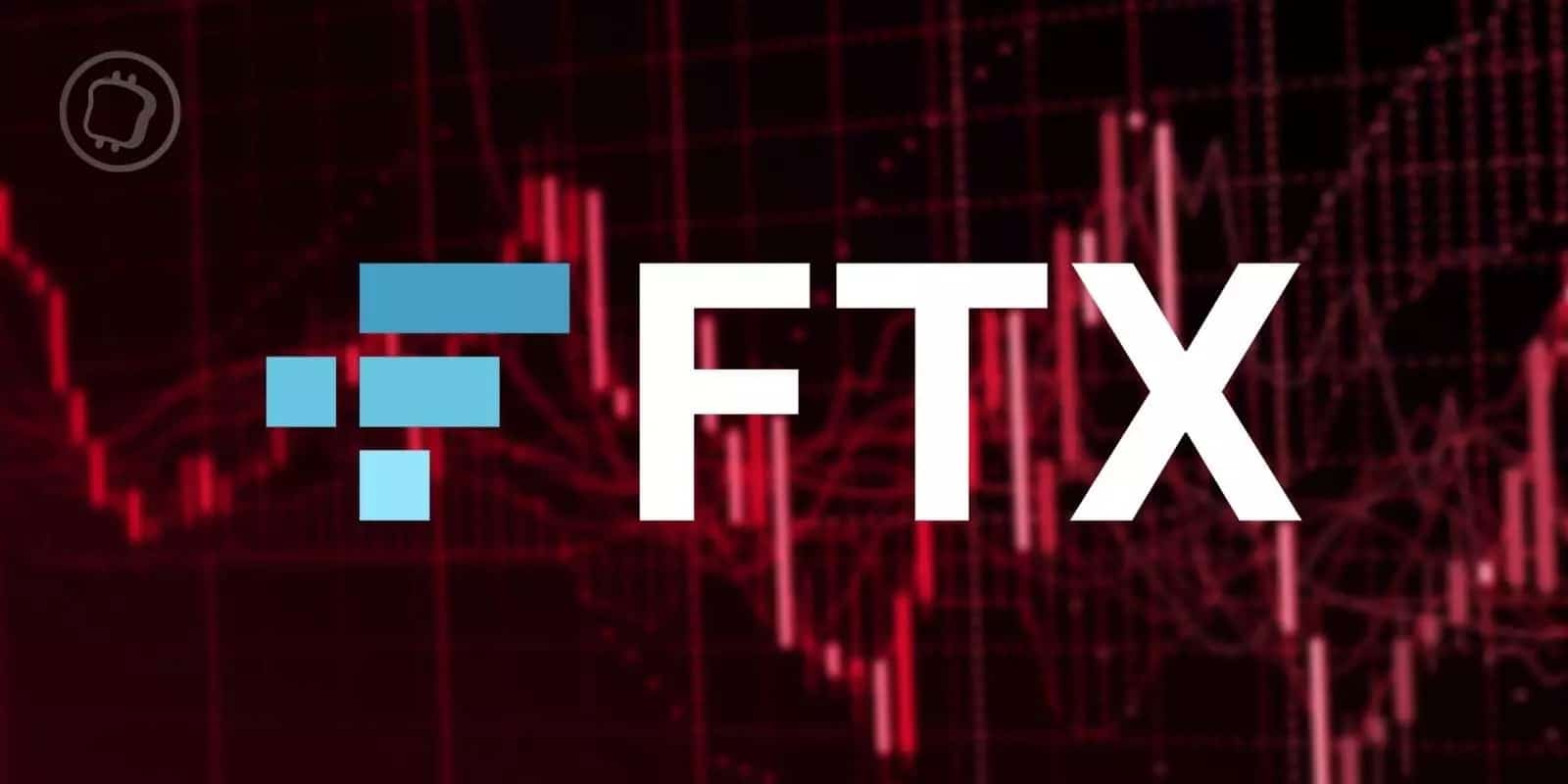 At the moment, FTX CEO Sam Bankman-Fried is in one crisis after another: between the publication of the pejorative report on the state of Alameda Research, the massive withdrawals of its customers, and the fall of its FTT token due to the setbacks with Binance, the exchange has rarely experienced such a tense period for its future.

FTX loses some of its customers

After a report about Alameda Research, a trading company owned by Sam Bankman-Fried, it turns out that the company would be at risk of insolvency if the price of the FTT token were to fall significantly. Since the FTT token is the FTX platform’s token, some users have started to flee the cryptocurrency exchange.

Indeed, the report shows that Alameda Research reportedly owns $5.8 billion in FTT cryptocurrency. The problem? The FTT tokens in circulation are only $3 billion.

But in the last 48 hours, things have accelerated: after the announcement of a 23 million FTT transfer made by Binance, from an unknown wallet to the Binance exchange, FTX customers are starting to flee the platform and withdraw their funds inordinately.

In parallel, massive withdrawals of stablecoins are being made. In just 48 hours, FTX’s USDT reserves have fallen from $120 million to $3 million. There is no doubt that the exchange is currently undergoing one of its biggest crises.

Significant withdrawal of cryptocurrencies is not the only problem for FTX.

After Binance announced that it was transferring its FTT tokens, the cryptocurrency’s price has fallen by 10% in the last 48 hours. 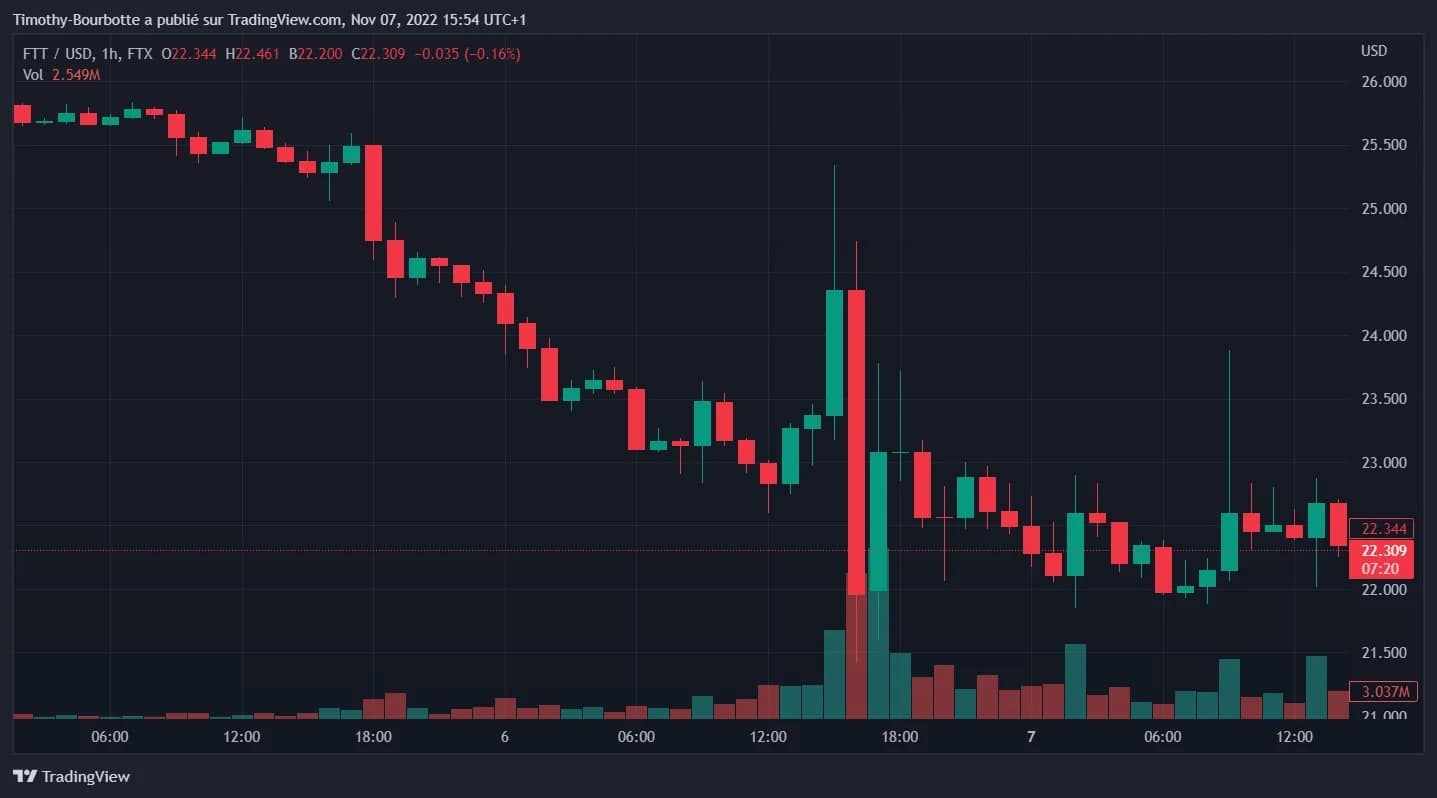 FTT tokens price evolution since the beginning of the deal

In parallel, the SOL cryptocurrency of the blockchain Solana is also falling, recording at the time of writing a loss of 12% in 24 hours. As a reminder, FTX CEO Sam Bankman-Fried is very close to the Solana network and regularly praises the merits of this blockchain.

To reassure investors, FTX is trying to defend itself: Sam Bankman-Fried retweeted a message stating that the data collected about Alameda Research was incomplete.

A few notes on the balance sheet info that has been circulating recently:
– that specific balance sheet is for a subset of our corporate entities, we have ☻ $10b of assets that aren’t reflected there

A few comments on the balance sheet information that has been circulated recently: this specific balance sheet only covers a subset of our entities. We have over $10 billion of assets that are not on it.

Nevertheless, investors are still on their guard: at present, no documents have been transmitted by either Alameda Research or FTX. In a context of crisis, this lack of transparency can only increase users’ distrust of the exchange.

A turnaround for FTX

To cope with FTT sales and withdrawals, FTX is reportedly trying to raise funds by any means necessary.

As of yesterday, hundreds of millions of dollars are being sent by Circle to Alameda Research, which is then redirected to FTX.

Alameda Research is sending stablecoins to @FTX_Official in size.

Just 15 minutes ago, they received 56M $USDC from @circle and then deposited it on FTX.

Within the last 24h, they have sent a total of $257M. pic.twitter.com/3qZc1ULjEZ

” Alameda Research is sending stablecoins to FTX en masse. Just 15 minutes ago, they received 56 million USDC from Circle, and then deposited it on FTX. In the last 24 hours, they have sent a total of $257 million. “

Updating the results at the time of writing, over $300 million USDC has been sent by Circle in the last 24 hours. Would FTX need outside help to cope with its losses?

These funds, sent by Circle, could potentially allow FTX to buy back the mass-sold FTTs and thus prevent the price of the token from falling further.

This situation is reminiscent of the various bankruptcies that took place in June 2022, such as that of Celsius Network.

At the time, Sam Bankman-Fried mocked the cryptocurrency industry by saying that “some third-party exchanges are already secretly insolvent”.

Today, the situation is no longer in his favour: it’s his direct competitors who are picking up his customers’ displaced funds, with Binance at the forefront.

The war between the two behemoths FTX and Binance has only just begun.

Circle’s EUROC stablecoin will soon be available on Solana (SOL)